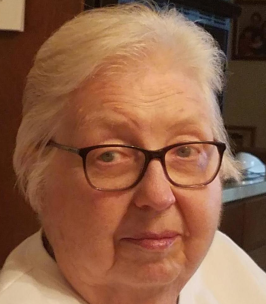 Lois was born on July 16, 1927, in the family farmhouse north of Atlantic, the daughter of Louis Leonard and Bertha Wilhelmina (Goettsch) Helbourg. As a child she and her sister, Donnis often rode to school on their pony. Following graduating from Atlantic High School in 1945 she received Normal Training and taught in Pymosa and Washington Townships. When Lois would tell of her days in teaching, she was always recalled how wonderful she thought it was when the older students helped the younger ones. The years she taught were later helpful as a 4-H leader and in giving advice to her daughter, Jolene when she was homeschooling her own children.

On May 28, 1950, she was united in marriage to Maurice Dean Coomes at the Peace Evangelical and Reformed Church in Atlantic. They lived southeast of Wiota until moving to her family’s homeplace north of Atlantic in 1964. The night they moved in was memorable due to the storm that left a tree on their front porch.

Lois canned countless jars through the years of what she had harvested from her large garden. She enjoyed reading novels and collecting knick-knacks. All the traveling and camping they did as a family and later just as a couple created memories she treasured. Every summer the family would go camping for vacation; attending the Seattle World Fair one year. Favorite trips as a couple were to the North Rim of the Grand Canyon and Alaska. Lois also explored outside the United States in Germany and England with extended family. Every year she looked forward to neighbors gathering with their families to celebrate New Years, 4th of July and the end of harvest. Lois was often referred to by others as a brick; stable in unstable situations and supportive. She was someone you could count on; she was giving and would do anything for her family and friends, even going alongside Dean in the Barbershop Chorus. Lois was a member of the Wiota United Methodist Church and was active as a Sunday School and Vacation Bible School teacher.

She is preceded in death by her parents, Louis and Bertha Helbourg; husband, Dean Coomes; daughter, Janelle Coomes; and infant brother, Leroy Helbourg.

A graveside service will be held at 9:30 a.m., Saturday, June 19th at the Atlantic Cemetery. Following the service, visitation with the family present will be held at Roland Funeral Home until 11:00 a.m.

In lieu of flowers memorials may be directed to a church or charity of your choice.

Roland Funeral Service is caring for Lois' family and her arrangements. Condolences may be left at www.rolandfuneralservice.com.

All rights reserved. This obituary is also archived at obittree.com